Over the last few months I’ve noticed that I’m developing a growing interest in men’s fashion, particularly the return to the well-dressed gentleman that is happening this season. Men’s fashion in a lot of ways is very different to women’s and a recent tweet from GQ Fashion quoting Tommy Ton (@jakandjilblog), got me thinking about the lack of choices men seem to have compared to women:

“A guy can’t go too far outside his comfort zone without looking like a freak.”

In a lot of ways I completely agree with Tommy Ton; whereas women’s fashion focuses on the revolutionary, (whether it’s new shapes or textures of the season), menswear seems more about evolution. Other than with certain anomalies, ie drop-crotch jeans (or JLS pants as one of my lad mates calls them), there are few items available for men which stray beyond fairly safe boundaries of conventional dress. And even with the JLS pants, the explanation seems to be that if enough men (celebrities included) jump on the bandwagon then these bizarre styles have a way of working their way into mainstream dressing, and before you know it there’s a load of blokes walking around in hareem trousers without stopping to question why (I’m waiting for someone to prove me wrong and actually pull this one off..). Take the recent All Saints phenomenon that saw half of the male population consigned to wearing their jeans tucked into army boots and you get the point I’m trying to make. 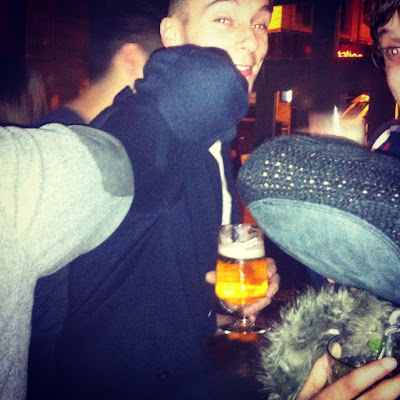 Now the majority of the lads I know are very much lad’s lads who are interested in fashion but they wouldn’t go shouting about it. A great example of how the unfamiliar is rejected in men’s wear until it filters down happened only a couple of weeks ago.. One of them had been getting a new cardigan before Christmas with suede elbow patches and for weeks they had all been winding him up about it and telling him he looked like a Grandad. So you can imagine my amusement at discovering on a night out recently that they were ALL wearing jumpers (or cardigans) with elbow patches!!

Only a slightly different note, but still on the topic of menswear… I’ve recently read John Harvey’s Clothes, an interesting exploration of what our clothes say about who we are. In one section of the book a passage on men’s clothing caught my eye:

“Ties are like tiny catwalk shows, as if all that women’s clothes may display – in bright colours and daring colours, and startling curving lines and shapes – may be performed for men in the tiny lozenge, or vertical strip, that hangs down from our necks. Of course, that display may be grossly done, in ties that should be torched on sight. But good ties are something: clearly they are the part of menswear that can show men in touch with their feminine side, as women’s clothes, nowadays, have many touches of the masculine.” Judging by my Dad’s vast collection of ties this certainly seems to be the case! I’m always fascinated by how much more willing he is to take risks and experiment with colours and textures in his choice of ties in comparison to the rest of his wardrobe.

Call me old-fashioned but in my opinion nothing beats a man in a suit. Personally I’m hoping that the highly anticipated release of The Great Gatsby will help to build the growing trend of the return of the well-dressed gentleman.