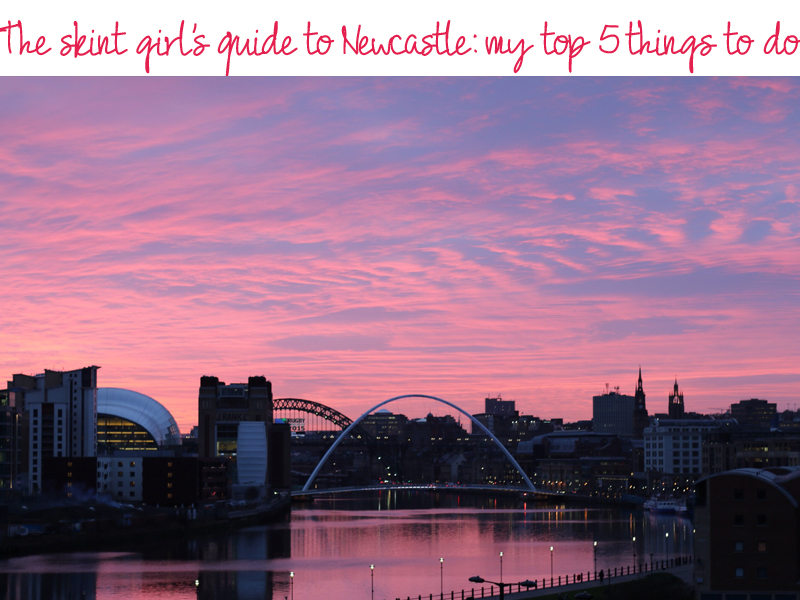 Is it just me or is this year already flying by? I feel like Christmas is barely over and yet we’re already in February. And with the warmer months, comes summer planning. So obviously I’ve already been hard at work and arranged an April getaway, there’ll be Glasto in June and now planning a trip to Canada in July. Unfortunately that means that the savings I’d put together for this weekend in London are now going to be completely wiped out paying for flights and stuff. Time to start saving. Plus after a pretty busy weekend at BBC 6 Music festival (and with another one ahead), now seems like a good time to start. And since saving blows, I’ve been thinking what I can do to spend less money and still feel like I’m having fun. So in the interest of helping me get ideas, let’s try a different type of post. Whether you’re a student, feeling a bit skint or just want to save some cash, here’s my top 5 things to do in Newcastle…

1. Walks along the Quayside
I’m lucky enough to call the Quayside home and the shot above was taken at Sunset from our balcony. So obviously wandering along there was the first thing that came to mind! There’s a more peaceful feeling right on the front (until you start to get to the bars), so it’s a great place for a stroll. Plus on Sundays, there’s a brilliant little market selling all sorts from old books and CDs to mosaic mirrors and handcrafted leather bags. Be sure to check those out (David Nash is the man you’re looking for), and you can pick up gorgeous leather clutches for less than a tenner. You could always head across the Millennium bridge afterwards for a wander around the Baltic too (which is free admission)

2. Shopping in the Grainger Market
The Grainger Market is one of my favourite places for a wander. It’s over 175 years old and right in the heart of the city. From cupcakes (obviously Pet Lamb), slices of pizza and gyoza, to good old fashioned butchers, and greengrocers, it’s an amazingly eclectic mix. Ok so shopping kind of involves spending, but you’ll spend a lot less that at your local super market. The fruit and veg are super fresh and super cheap. Plus you can get gret flowers from Katherine’s florist. My top tip is to visit on a late Saturday afternoon when they’re coming to end of day trading, you’ll be able to pick up some real bargains as they try to shift their stock!

3. Tuck into Fat Hippo for a fiver
Skint but still craving good food? Noooo problem. Head to Fat Hippo at lunch time during the week and you can get a burger from their Fast Hippo menu for £5. And it comes with chips! Practically the same price as McDonalds and you get a much better quality burger. Trust me, I eat there enough. They’ve got two places now, one in town near the Theatre Royal and the other in Jesmond. The original Fat Hippo is a popular joint for students, situated right in the heart of Jesmond (where there’s loads of great student properties), not too far from West Jesmond Metro and Osborne Road. If you’re heading that way then you may as well check out Osborne Road too. Most of the bars (or maybe all of them?) offer insane Happy Hour deals where you can win free drinks or get two for one with their promo buttons.

4.Visit a local park
Ok another wander around one, but seriously. Newcastle is one of those places that’s known for its industrial past, but we’re lucky to have a lot of green space around. My favourite park is probably Leazes Park (situated a stone’s throw from Newcastle University), which is Newcastle’s oldest park. It’s got a gorgeous Victorian bandstand and is a brilliant place for summer picnics (when the weather is warmer), or just to lose yourself in a good book! Another firm favourite of mine is Heaton Park (right in the heart of some of the cheapest student accommodation – speak to the people at Walton Robinson to find out more). Like most parts of the city, Heaton’s got a mix of student accommodation and professional/family. But what I like about is it’s dead relaxed. Heaton Park itself has a lovely laidback feel to it. It’s one of those places that still feels peaceful even where there’s loads of people about. Other great places for a wander include the Ouseburn Valley (not technically a park but there’s a mini farm) and Jesmond Dene.. if you’re looking for somewhere else leafy and green to spend hot summer days, or a crisp walk wrapped up in your biggest coat.

5. Pour over old books at the Lit & Phil
The Lit & Phil is an independent library which first opened its doors in 1825. It’s a Grade II listed building and the majority of rooms have largely remained unchanged since then. If you’re anything of a book lover like me, this is the sort of place you’d want to spend hours in, pouring over yellowing paperbacks and enjoying that familiar vanilla, musty smell.