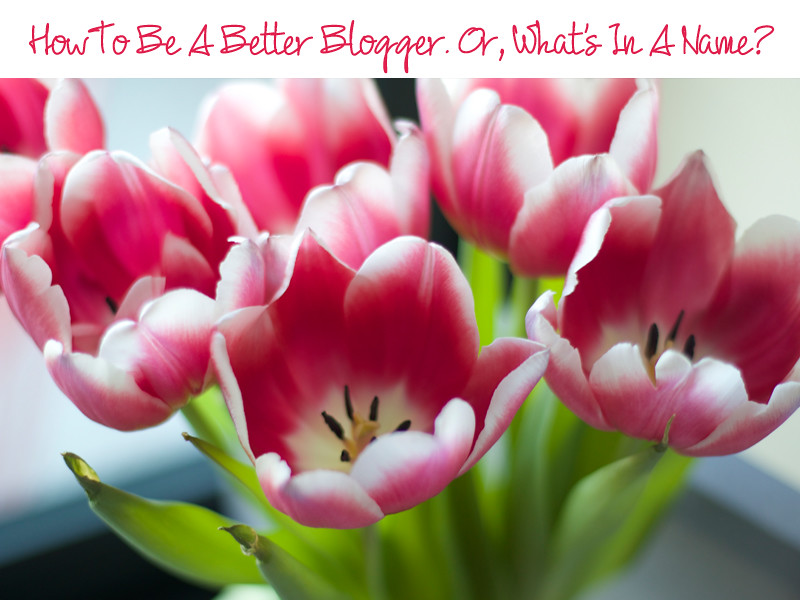 First of all, I’ve been thinking for probably the better part of a year about my blogging. About where it’s going, what I want from it and what ultimately I need to do. In my full time job I work as a brand manager. I’m somewhere between an account manager, a copywriter, and a social media strategist. I help my clients to figure out the personality of the brand. And I create a voice for them that helps them to spread their message. My daily life is about helping define other people’s brands, creating communications plans and helping them market themselves online. So why have I failed to practise what I preach? For a while now my problem has been my blog name. Raspberry Kitsch. When I first set up my blog in 2009 it probably had some kind of meaning. Now it feels a bit twee. It doesn’t really fit the content I want to create and so I want to change it. I want to make something more of my blog, and have it as a platform that relates more to my professional life. I’m already taking steps to improve content. I’m going to photography classes. And I’ve been meeting up with other bloggers like Charissa to shoot more outfits. But my name is still a sticking point. And I’m torn between tearing everything up and starting fresh (and what the repercussions are for things like Domain Authority and Page Ranking), or trying to persevere. And it’s the confusion of making a decision (ie forcing myself to think of something better or sticking with what I’ve got) that’s winding me up.

But it seems I’m not the only one getting stuck on trivial details. The majority of my closest friends are all twenty somethings. Like me, they’ve managed to blag or luck or slog their way into a job doing what they love. They’re all successful, pretty and intelligent women. Our roles are in different sectors, but we’re all going through the same thing. We’re all experiencing some form of doubt, or anxiety or fear. Fear of failure, doubt of choices, anxiety about the direction we’re going in. It’s somewhere between knowing that you’re doing ok and you’re on the right path. And having a full blown identity crisis. Whether it’s happening at work, in their relationships or otherwise personal life. It’s the common thread across them all. Am I doing the right thing? Have I made the right choice? Is such and such the right person for me? Am I really happy? And honestly, it’s exhausting. So where does it come from? I’ve been asking myself the same thing. And I keep coming back to that one passage that always stood out of Sylvia Plath’s Bell Jar:

“I saw my life branching out before me like the green fig tree in the story. From the tip of every branch, like a fat purple fig, a wonderful future beckoned and winked. One fig was a husband and a happy home and children, and another fig was a famous poet and another fig was a brilliant professor, and another fig was Ee Gee, the amazing editor, and another fig was Europe and Africa and South America, and another fig was Constantin and Socrates and Attila and a pack of other lovers with queer names and offbeat professions, and another fig was an Olympic lady crew champion, and beyond and above these figs were many more figs I couldn’t quite make out. I saw myself sitting in the crotch of this fig tree, starving to death, just because I couldn’t make up my mind which of the figs I would choose. I wanted each and every one of them, but choosing one meant losing all the rest, and, as I sat there, unable to decide, the figs began to wrinkle and go black, and, one by one, they plopped to the ground at my feet.”

Anxiety of choice. The worry of having so many options that you can obsess over which one is the right one to go for. How can someone’s biggest problem be that they can have too much choose from? Recently Lauren and I took part in a social media debate. It was a round table discussion about social media and brands. And it was the first time I’ve heard anyone in real life refer to my generation as ‘millennials’. I listened to experience marketeers lament that they didn’t know how to talk to my generation. They didn’t know how to address us. And it was then that I first thought about my generation and what impact technology has had on our lives. On the way we spend our days and how we communicate with one another. It’s not just that we’re the generation consumed by the anxiety of too much choice. The other side of that is that we’re the empowered generation. Our parents, our teachers, the government. They all told us that we could do whatever we wanted. Everyone had a fair chance to build their own path. Anyone could go to university, get a career, find a partner, have a family. You don’t need to choose between having a career and a family. You don’t even need to have a partner to have a family. You can do it all. And you can do it all by yourself. All of a sudden, the internet gave everyone a voice, (admittedly some of them we’d rather not hear). Everyone has a pretty equal playing field. Want to find an answer? Google it. Want to write? Start a blog. Want to get published? Publish it yourself online. Want to teach yourself something new? You can probably find a Youtube tutorial. We’re no longer bound by the same hierarchy our parents or the generation before them were. We don’t need to wait til we’re greying to be the big shot of a company. Some of the world’s largest and most successful organisations are ran by people under 30. In a world where innovation is happening on a daily basis, how much experience you have isn’t as relevant as whether you can keep up with how fast things are changing. It’s about adaptability and understanding how to relate an audience that is much easier to reach but much harder to engage.

So instead of getting myself wound up with the little stuff. I realised it’s a much smarter idea to channel my energy into being productive. In using more of what I do on a day to day for other businesses to market myself. And create a better brand for my own blog. One that’s more fitting with its content and its personality, as we both grow up. Rather than getting frustrated by the things out of my control. And the things that don’t quite fit or that I can’t seem to get right. Because ultimately, while I’m worrying about the choices that I should or could be making, there’s a million other opportunities just passing me by.